Follow your bliss. That summarizes the philosophy of 20th century author and mythologist Joseph Campbell. In his book, Reflections in the Art of Living: A Joseph Campbell Companion, Campbell said, “If you follow your bliss, you put yourself on a kind of track that has been there all the while, waiting for you, and the life that you ought to be living is the one you are living… I say, follow your bliss and don’t be afraid, and doors will open where you didn’t know they were going to be.” I bring up Campbell and this idea because I believe it is a very important concept for leaders and entrepreneurs. I find that successful leaders and entrepreneurs understand that they will be most effective when they live authentic lives and are true to themselves. I thank my interviewee this week, Coyt Bailey, for introducing me to Campbell and his work. Bailey is the owner of Mercury Aviation, a leading helicopter aviation company based in Flowood, Miss. 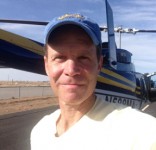 Bailey is a Jackson native who received his undergraduate degree from Hampden-Sydney College in Virginia. Out of college, Bailey followed his passion of the outdoors and worked for a number of years for Outward Bound. His travels also took him to Mexico where he was a teacher. However, he kept coming back to a desire to fly helicopters. When he looked into pursuing his training to become a helicopter pilot, he was strongly dissuaded from that path. People told him there were not any jobs and that he should become a fixed wing pilot instead. He followed this guidance and earned his pilot license in Oklahoma and flew for about a year, but he still wanted to pursue being a helicopter pilot. In spite of his detractors, he decided to “follow his bliss” and went to Oakland, California, to get his credentialing as a helicopter pilot.

Out of training, he landed a job doing traffic reports back in Jackson. For those in the local Jackson market, they will probably remember his tenure where he was Captain Coyt who flew with Chopper Bob for WLBT.

What originally started out as following a passion, has turned into a thriving business. Today, his company Mercury Aviation has nine pilots and provides helicopter services all over the country.  His company has expanded to serve law enforcement agencies, utilities, real estate and construction companies, and many others. As I interviewed him for this article, he was flying his helicopter across the Midwest to a project in North Dakota. He shared, “It has been an incredible experience to visit 48 states and view the world from 500 feet in my helicopter.”

It takes courage to follow your bliss. Bailey explained that his mother gave him books by Joseph Campbell when he was in college. He said, “She always believed in me and encouraged me to pursue my dreams.” He also credits his father, Buster Bailey, with modeling for him how to lead a successful business. He noted, “My father drilled into me from an early age the importance of integrity, honesty and compassion. He modeled these for me in how he ran his business.” For young entrepreneurs, Bailey advises, “Make sure you are passionate about your business. It will take much more work than you expect, and there will be unforeseen challenges along the way. If you are not passionate about your work, it will be very difficult to endure these challenges.” I was encouraged by Bailey’s story and the focus he has to follow his bliss for his life and career. I hope you will consider and follow your own bliss for your career. Life is too short not to.